This was the last week of the winter season, so I have one anime from this season. In all I watched 21 episodes, including 13 shorts.

Tamako Love Story is a full-length movie following the Tamako Market TV series. Mochizou is seriously considering studying film-making in Tokyo and has decided to confess to Tamako before going away. It’s a love story with one airhead heroine and one poor, sweet boy. I don’t want to give anything away, but he confesses! And her reaction! Aaaa! I cried.

Subjectively, I loved it. Objectively, the art is KyoAni. The plot is more than just a love story — we are confronted with all the main five characters’ visions of future and then there’s the baton club entering a contest. Plus there’s a little more development of lesser characters, like the shopping district men and women. I don’t think there are any bad points… maybe the yelling, but that might be more cultural? (When the characters are frustrated they run out into an open space, like a riverbank or a field, and just scream.) Let me know, what you think.

Rain in the Sunshine 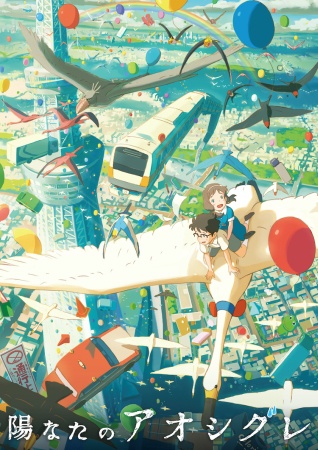 Another love story — Hinata falls in love with his classmate, Shigure. However, Hinata is not good at talking to people, so he keeps his feelings in his imagination and drawings. Shigure notices his drawing of a swan/duck and they become friends. Then Shigure’s father’s job makes Shigure move away. On Shigure’s last day at school and the day of the move, Hinata decides he needs to tell her his feelings and chases after her taxi and the train.

I’d say the plot isn’t all that unlike Tamako Love Story, but in the end it’s so different, mostly due to the personalities of Hinata and Shigure and the time constraint. This is only 18 minutes, so the story is pretty concentrated. A lot of screen time is dedicated to Hinata’s imagination and beautiful birds and nature. On the other hand there were some scenes I didn’t like and judging from the MAL discussion I’m not the only one. Specifically, the scenes where Hinata sees Shigure’s underwear and vice versa.

Six short OVAs — the first three are from Dera’s Bar, where the girls and Dera talk. It’s kind of like a poorly animated character drama?

The other three are about Choi and those are much more interesting. What does Choi want to become when she grows up? Or a girls’ pajama party! And the third one is called “Choi in Love”. I feel like Choi didn’t really get the screen time she would deserve in the original TV series. She’s a good character.

These are also shorts. The main character, you, interacts with three girls one after another. Everything is from his/your POV and you only hear one side of the conversation, the girl’s of course. The animation is nice, but the plot is very simple — it’s just like every other visual novel. All the girls like him/you. Boring really, but the girls are cute.

Well, I’m making it up to you this week. This is a proper post. Next week I’ll be starting some of the spring season’s anime, so there might be some First Impressions. Maybe.