If you’ve read my bento post, you know I have a bit of an interest in Japanese cuisine. Today I want to write a tiny bit about oden, an eintopf Japanese dish, which appears in anime quite often.

So, what is it? This is a difficult question to answer, because there are countless regional and household varieties. I’d settle for a dashi broth with kamaboko, boiled egg, konjac and white radish.

(I would have loved for Sushi and Beyond to dedicate an episode to oden.)

Now let’s dive into some depictions of oden in anime and hopefully its nature will become clear to everyone.

First off we have Nagato Yuki-chan no Shoushitsu (a Haruhi spin-off). In the very first episode, Asakura Ryoko makes oden for Nagato Yuki and Kyon. The anime offers a clear look into the pot. The chopsticks are picking up white radish, daikon. Other than that we can see eggs in the middle, fried tofu (atsuage) at 6 o’clock and kinchaku at 7. Those white tubes at the top are probably fish cakes, kamaboko, and those black rolls are rectangles of konbu.

I think white radish is pretty self-explanatory, but what is atsuage? It’s tofu that has been deep-fried (sometimes twice, at two different temperatures) and because of that gained a very nice golden crust, which soaks up sauces wonderfully. 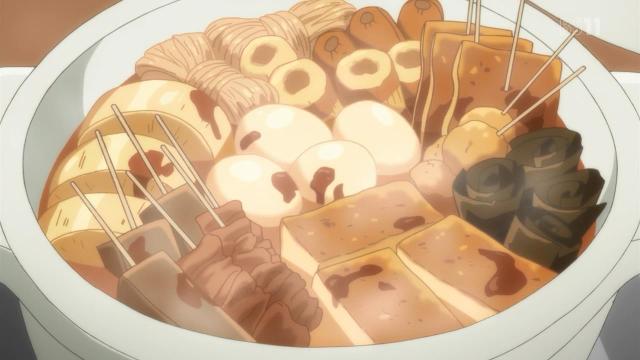 Aburaage is a sister-food of atsuage. Once again it’s fried tofu, but this time the pieces are pretty thin, so there’s little white left. Can you see them around 2 o’clock?

Second anime I want to mention is the recent Koufuku Grafitti by SHAFT. It’s a cooking anime and the animation is beautiful (it’s SHAFT after all) — Koufuku Grafitti is known for its foodgasm scenes. Although they’re not as explicit as in Shokugeki no Souma, they’re worth looking up. In the top view of the pot, you can see daikon, konjac, eggs, konbu, and a mochi pouch, for example.

Mochi pouch is the next oden ingredient I want to talk about. As you can see in the first screenshot above, it’s a pouch… filled with mochi. (Captain Obvious!) The pouch itself is made from aburaage and tied with an edible string. And mochi is made of Japanese short-grain rice specifically cultivated to be made into mochi. The consistency is that of very stretchy dough. I like it with red bean paste, anko.

Next up is just a quick mention of Kanon (2006). Right at the beginning of episode 3, we can see the family eating oden. This one is special because of the carrots.

I can identify konjac, daikon and a mochi pouch. Konjac, or konnyaku in Japanese, is that slimy mottled grey rectangle on the left side of the plate. It’s made from the konjac plant.The consistency is firmer than but not unlike gelatin. The flavor is close to nonexistent, tasting slightly of salt or the sea, if seaweed is added. 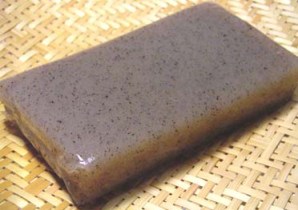 Those were homemade odens. However it is possible to buy oden like fast food from a food stall, an oden cart to be exact, in the street. Those pop up in anime quite often as well, so I put together a couple of screenshots.

On the left is an simple old-fashioned oden cart from xxxHOLiC episode 5. You can see Watanuki’s plate on the right with konjac, a mochi pouch, half an egg, daikon and possibly potatoes.

Another oden cart can be found in 93rd episode of Teekyuu. You can see the common signs in these screenshots — a simple table with the yummies simmering in broth, a simple bench and a blue curtain with oden written on it. The old-fashioned cart in xxxHOLiC also has a paper lantern with oden on it.

Anyway, what can we see in this cart? Daikon, possibly potatoes, tofu, some skewers and kamaboko. There are many names for surimi products, such as kamaboko, depending on whether it’s boiled (such as naruto), steamed, grilled or fried. I’m pretty sure I could write an entire blog post on Japanese surimi products. Maybe someday?

Here are some more screenshots from Shirobako, this time from episode 22. Even things like cabbage rolls make it into oden. Other than that I can see daikon, eggs, konjac, atsuage, a mochi pouch and beer (as mentioned above).

The oden cart in Kore wa Zombie Desu ka? of the Dead episode 9 has a lot of potatoes, daikon, some mochi pouches, eggs, kamaboko, atsuage,… (The animation is not high quality for this scene, so I’m guessing.)

Almost done; we have Binbougami ga! episode 4. This oden cart carries daikon, renkon, eggs, konjac, mochi pouches, kamaboko and tofu among other things. The last ingredient I want to point out is renkon, lotus root. Lotus root is that circle with holes in it. Read more at JustHungry, where Makiko Itoh writes about its preparation and includes some recipes. 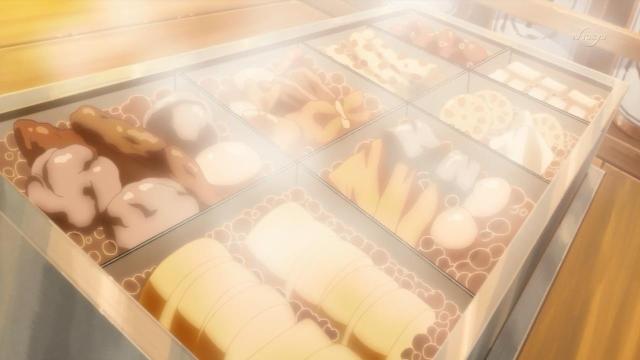 Lastly, have a Lawson promo: Song of Oden by Hosogane Takuya