While searching for kodama in anime, I came across this magical girl series. One middle-school Hero Club usually helps out in their community by finding homes for stray kittens, putting on plays for kindergarten children or cleaning up the shore. As it turns out though, the club has a mission bigger than that.

As always, there will be SPOILERS for the first three episodes!

In the first episode, the girls are chosen to protect the Divine Tree and through that the world. They transform into magical girls and take on their first enemy. 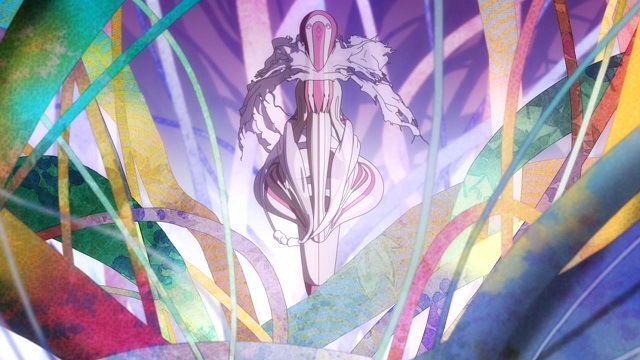 On the other side of the equation are the Hero Club members. Fuu-senpai, the leader and the only one, who knows how to do this magical girl thing. Her sister, Itsuki-chan, an archetypal dojikko. The main character, Yuuki Yuuna, who seems to be a natural at blasting enemies into pieces. And finally, Tougou, a scared computer whiz in a wheelchair. 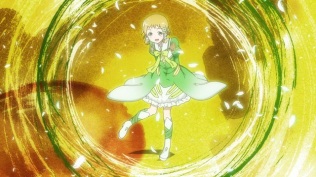 Itsuki-chan is killing enemies with a smile.

Transformations are always important to review when you’re watching a magical girl anime. This one is very chaste compared to, let’s say, Cutie Honey. Except for the lingering view of Fuu-senpai’s crotch. There’s no nakedness or even plugsuit-tight auras. Itsuki-chan’s smiles are a little over the top, but her floral outfit is very cute.

I had a magical girl phase in my otaku career and have watched quite a number of mahou shoujo anime. The most well-known were the first two seasons of Magical Girl Lyrical Nanoha and, of course, the first season of Mahou Shoujo Madoka★Magica. While I don’t think I’ll ever watch any more Nanoha, I definitely want to watch some more of the Madoka franchise.

The magical girls each get a guardian spirit of sorts from the Divine Tree. Itsuki’s is called Kodama and Yuuna names hers Gyuuki.

In the second episode Fuu-senpai explains the world to the other girls and the audience. Their Hero Club was chosen to protect the Divine Tree from twelve Vertexes named after the signs of the zodiac. The first one they met was a Virgo Vertex. It was going towards the Divine Tree to destroy it and with it the human world. Even the little damage that the Virgo Vertex caused before they killed it lead to a car accident in the real world.

Soon after, there’s a second emergency. There are three Vertexes attacking. And we finally see Yuuna’s and Tougou’s transformations. Tougou’s transformation depicts her basically tied up by tentacle-like ropes of light, which then change into the ribbons of her outfit. I was a little disappointed after her mahou shoujo form was revealed, because I was hoping she would get to walk again. Still the ribbons holding her up so she is essentially floating are a nice touch.

It’s so nice that so far every Vertex is very much different, not just in appearance, but also in fighting techniques and resistance to sealing. Never a dull moment. Same with the girls’ abilities; just when they seem to be on the verge of being killed, they break out a new skillset or tactic.

In episode 3, just as the girls are about to attack their fifth Vertex, the Capricorn, a solo magical girl appears and takes it down single-handed. Her name is Karin and she’s taking over. You can go back to serving the community with your plays and trash pickups, girls!

Karin is a very serious tsundere. Of course Vertexes have to be taken seriously, but you can let up sometimes. Have fun when you’re not saving humanity.

The rest of the episode is focused on the Club trying to work with Karin, but she isn’t making it easy for them. Honestly, she is being quite a pain and the whole episode was very hard to watch. Cringing all the way through.

Verdict: Until Karin, the tsundere, appeared, it was a pretty nice series, albeit rather predictable. Friendly atmosphere, defeating the monsters of the week swiftly and without much trouble. I don’t know if I like the half and half combination of slice-of-life and fighting. On one hand slice-of-life is one of my favorite genres, on the other the stark difference between the two halves is a little off-putting. The fighting makes the peaceful scenes look boring and those in turn calm you down so much that you can’t intake the sudden changes in pace. It just feels unbalanced.

I know why I haven’t watched this earlier—mahou shoujo is just not my type of anime anymore and therefore the blurb wasn’t of much interest to me—but it is rather enjoyable. So far it’s around average, but if Karin keeps being a pain and the plot so predictable, then it will probably drop to 4/10. I will continue watching for now.