This is a double review, attempting to highlight the short animations that come out off Young Animator Training Project. In 2015, the project was called Anime Mirai and it spawned four animations. Unfortunately I haven’t been able to get all four. Hence it’s only a double review. I’ll try to make it as spoiler free as I can. 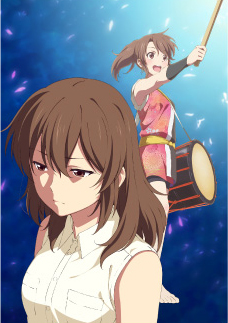 It has been 10 years since Aki moved to Tokyo to pursue her childhood dream of becoming a taiko drummer. However, trying to balance work and taiko practice is harsh, and each day is incredibly stressful. One day, Aki receives a phone call. A taiko drum festival is going to be revived after 15 years. Will she be able to come back and give technical guidance?

This is a story of finding lost passion. Before returning to her hometown to train the drummers for the festival, Aki feels like a failure for not being able to live off her drumming jobs. That she still has to keep a second job to pay her bills. But looking at the other drummers in her squad, she’s not the only one.

If you’re feeling lost on your journey and lack the drive and motivation to continue, think back to the things that made you start. That initial excitement and the reasons you have since almost forgotten might spark something. Aki remembers her training and the festivals in her hometown, the way she loved taiko drumming before it became a means of making money. END_OF_DOCUMENT_TOKEN_TO_BE_REPLACED

Have you ever heard of Anime Mirai? Or Anime Tamago? Or one of the 32 shorts that were born through the Young Animator Training Project? You might not know it, but you probably have.

Young Animator Training Project is an annual project launched in 2010, and funded by the Japanese government’s Agency for Cultural Affairs in order to support training animators. The project culminates in a series of anime shorts produced by various animation studios each year.

The project was launched by Japanese Animation Creators Association (JAniCA) in 2010. The animation labor group received 214.5 million yen (about US$2.27 million) from the Japanese government’s Agency for Cultural Affairs, and it distributed most of those funds to studios to train young animators on-the-job during the year. One of the reasons for the support of the Agency for Cultural Affairs is the concern that more of the Japanese animation process is being outsourced overseas—thus leading to a decline in opportunities to teach animation techniques within Japan. In 2011 the Agency once again provided funding for JAniCA to select more young training projects under the same budgets.

When the project was introduced in 2010, it was called Project A. 2011 through 2015 it was called Anime Mirai—that’s when I heard about it. Since then the name has changed to Anime Tamago.

Anyway, why am I writing about it? I plan on writing about all eight past years of this project. Every year there are four shorts, so I have eight four-in-one reviews in mind.

To entice you a little more, let me mention that this summer’s 音楽少女 [おんがくしょうじょ, Ongaku Shoujo, Music Girls] originated in an Anime Mirai 2015. The series’ first episode aired the day before yesterday, July 6th, 2018. Little Witch Academia went through the same process.

Look forward to it!