For the second installment of my Winter 2018 preview, I picked three manga adaptations that will begin airing on Friday, January 12th and that I plan on watching. Watching one episode almost every day of the week is probably going to turn out impossible, when school and work get rough, but I will try.

Let’s get into this! This time I’ll be looking at the sources, synopsis and promotional materials of Koi wa Ameagari no You ni, Takunomi. and Hakumei to Mikochi. END_OF_DOCUMENT_TOKEN_TO_BE_REPLACED

This is a review of the three episode OVA, that aired Sep 10, 2016 to Sep 9, 2017. I’ve been told it takes place at a different time than the currently airing series (although MyAnimeList calls the OVA a prequel to the series), so there should be no spoilers. Of course there will be spoilers for the OVA.

先ず [まず, mazu, firstly] I want to look at the title 魔法使いの嫁 – Mahoutsukai no Yome. 魔法使い [まほうつかい, mahoutsukai] literally means magic user. So anything from charmer, conjurer and enchanter, through mage and magus to sorcerer and wizard is a valid translation. The only objection I have to the translation is that if it’s once translated as “the ancient magus,” then it shouldn’t be translated differently in other cases. 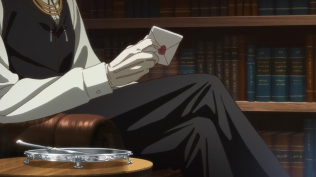 So, where did this anime come from? It’s adapted from a manga. It was originally serialized in 月刊コミックブレイド [げっかんコミックブレイド, Gekkan Komikku Bureido, Monthly Comic Blade], a 少年 [しょうねん, shounen, aimed at young males] magazine owned by Mag Garden from November 2014 to September 2014, when the magazine was replaced by 月刊コミックガーデン [げっかんコミックガーデン, Gekkan Komikku Gaaden, Monthly Comic Garden]. It has been published in English by Seven Seas Entertainment – the eighth volume is scheduled for next year. The manga seems to be ongoing though. END_OF_DOCUMENT_TOKEN_TO_BE_REPLACED

In episode 8 of Hoozuki no Reitetsu several facts about a certain Edo period artist, Hokusai, were mentioned. Even if you do not recognize his name, you are probably familiar with his world-famous print The Great Wave off Kanagawa. 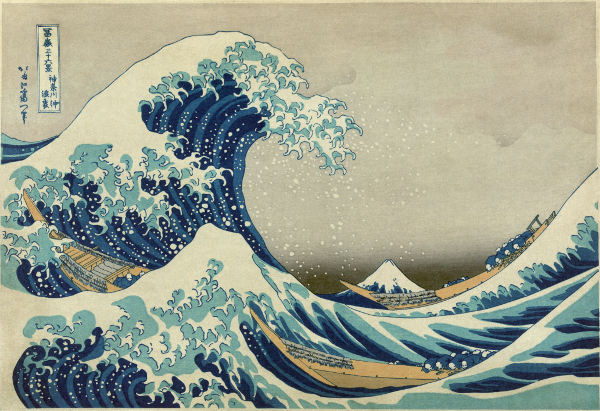 What I like the most about watching Hoozuki no Reitetsu are precisely these snippets of information about the Japanese culture. I really appreciate the meticulousness with which the translators and editors subtitle it. There are so many Buddhist terms, so I expect the research behind this to be exhausting.

The series itself is not particularly special — some may even say it is substandard — but I really enjoy learning about the various mythical creatures, religion and folklore through anime. I don’t intend to talk about the series today, so for more information please see its ANN entry. News flash: Hoozuki no Reitetsu is getting a second season this fall!
END_OF_DOCUMENT_TOKEN_TO_BE_REPLACED